Do you want to know the secrets of the ancient trades of Pinilla de Valle?

Through an attractive and simple route of 6 km in length, you will discover an endless number of curiosities and anecdotes of the old trades that existed, until many years ago, in our town.

The route leaves from the urban area of ​​Pinilla del Valle, located on the banks of the Pinilla reservoir, in the surroundings of the Sierra de Guadarrama National Park, a unique and very well preserved enclave.

On the route, very well marked, you will find informative panels, lecterns and tables of landscape, with interesting information about our cultural and natural values. 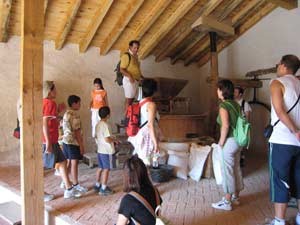 A three-hour journey takes the route. The first stop is in the old forge. Today: the House of Culture. The tools of this trade are kept: the bellows, the anvil, the screw, the pile, the colt and the objects it produced: grates for the plow, keys, pots handles, parts for the carts, tools of tillage.

Taking Chorro street up, after crossing the road you will reach "La Calera". In this place remains of the furnace where the limestone was introduced and burned until obtaining the lime for the construction. All the stops have an explanatory panel of the trade with photographs and text. There begins a road that runs along the Los Hoyos "Chico" river that hits the road. Next to "La Calera", in a shaded hollow gives a historical explanation of the valley and its inhabitants.

The trail, next to a small pine grove, crosses the river and then the road through a tunnel-bridge. After passing a green metal fence another bridge crosses and, to the left, goes up the path of La Marotera that leads to the flour mill. Before entering, taking advantage of the views of the Pinilla Reservoir and the village, the state of the water quality (of Lozoya River, the reservoir and Los Hoyos river), as well as the geography of the valley fertile, old plantations of cereal, forests of oak, high grasses and glacial remains of Nevero peak)

The mill, recently rebuilt, has the grinding machine ready to use if desired. The building has a gabled roof, irregular, and the walls are built on a sloping ground .. From the mill there is a separation of the route. You can take both ways to continue. The one on the right goes up close to the river. At a point you must cross the hill on the left, about 200 meters between trees and up, until you take the other road. It is advisable, after the mill, to take the left path which is safer. By it, slopes are always climbed on the trail and the three last stops are reached: the dry wall, the kiln and the huts of the coalmen, and finally, the shepherd's flock. The three stations are on the left side of the road, a few meters from the path. 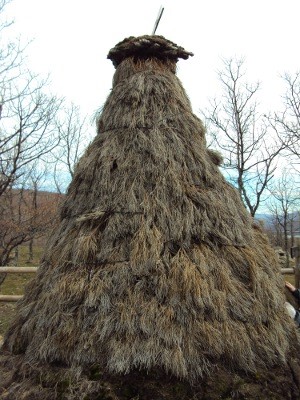 The drywall is the way in which the stone fences were made without mortar to separate private properties and keep the cattle subject. Below, stuck to the ground, large stones went; With strings the level and direction were maintained. In the middle of the fence, other transverse stones, the keys, avoided the fall. At the top were large, smooth stones called blankets.

Coal mining and sheep grazing were important businesses for many seasons because of their production volume. It was frequent to see from the village the smoke of smoke from the ovens that the fabriqueros raised in the many woods. The traffickers placed the production in cities like Madrid and Segovia.

At each stop there is a game of identification of materials and objects related to each trade. In the shepherd's herd they show old instruments that they used to pass the time or communicate. The guardian of the flock faced dangers such as inclement weather or the attacks on their animals or the loss of the herd.

The ascent ends in this shepherd's hut. And the return, this same way of descent, is very beautiful especially in its high part. It is recommended to wear suitable footwear and some bottle of water.