Such is the natural value of our municipality, that much of the surface of the municipal term is protected. The highest parts belong to Sierra de Guadarrama National Park and more than half of the municipality is classified as Special Conservation Area (ZEC), included in Red Natura 2000. 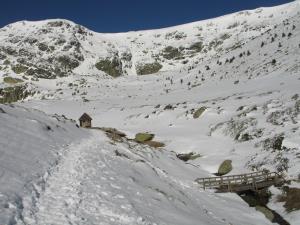 Declared in 2013, Sierra de Guadarrama National Park occupies an area of ​​more than 30,000 hectares, distributed in Madrid and the province of Segovia.

It is therefore one of the largest National Parks in Spain and protects the most valued areas of Sierra de Guadarrama, where they appear unique ecosystems of high mountain, of great environmental importance.

Much of the municipality of Pinilla del Valle is located within the National Park. Specifically, its northern third, where there are enclaves such as Pico del Nevero (2,209 m altitude) or glacial circuses. In addition, the rest of the area of ​​the municipality is included in the so-called Peripheral Zone of Protection of the Park, a space designed to "cushion" the possible impacts in the National Park.

The summit of Pico del Nevero is considered to be one of the best viewpoints in the Sierra de Guadarrama and the panoramic view offered by the summit is truly spectacular.

This protection figure, included in Red Natura 2000, covers an extensive area of ​​high and medium mountain. Among its many values, it stands out its great wealth and variety of species of flora and fauna, most of them of notable interest to be cataloged or to be endemismos, that is to say, unique species that are not found anywhere else.

Much of the trail of traditional professions of Pinilla del Valle runs through this area (once crossed the M-604).

The melojo (Quercus pyrenaica) is a species of oak that forms dense forests in the Sierra de Guadarrama, generally between 1,200 and 1,800 m altitude. It is one of the most characteristic and most valuable plant formations of the Lozoya Valley, and its conservation is fundamental for the survival of many species.

Alongside the rivers and streams we find a unique ecosystem of great value, which we must care for and preserve.

In these coasts grows a narrow strip of vegetation that is part of the so-called riparian forests. The species of plants that grow here need a lot of moisture in the soil to be able to develop, so they are almost always next to water courses, such as Arroyo de los Hoyos.

Willows and ash trees are frequent along the rivers and streams of the Sierra de Guadarrama. The ashes also appear forming clear forests or meadows, where cattle graze. 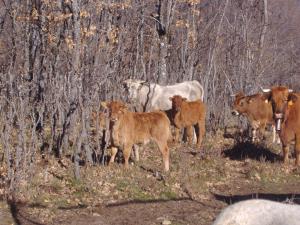 The cattle ranch of the Lozoya Valley:

Since time immemorial, livestock activity has been of enormous importance throughout the Lozoya Valley.

For centuries, thousands of cattle (mainly sheep and cows) have shaped the landscape, taking advantage of natural resources in a sustainable way. However, today, cattle have lost much of their previous weight.

The fauna of the Lozoya Valley:

The Lozoya Valley is one of the areas with the highest number of fauna species in the entire Community of Madrid. Proof of this, the different figures of protection that we find in the region, such as the National Park, Special Zone of Conservation (ZEC) or Special Zone of Protection for Birds (ZEPA).

Perhaps one of the groups of fauna less known and valued, but not by them with less importance.

Among the many and varied invertebrates we can find here, there are many species of butterflies, such as the striking Graellsia isabelae, nocturnal habits and closely linked to the pine forests; The flying deer (Lucanis cervus), considered the largest beetle of our continent, will be frequent in the melojares of the mountain range.

Among the most interesting species of amphibians that inhabit the Lozoya Valley is the Patilarga Frog (Rana iberica), an exclusive species of the Peninsula, always associated with fast and clean water courses, such as the Hoyos stream.

The reptiles are more abundant, so it will not be difficult for us to observe an Iberian lizard (Podarcis guadarramae) or colilarga (Psammodromus algirus), or some striking ocellated lizard (Timon lepidus). 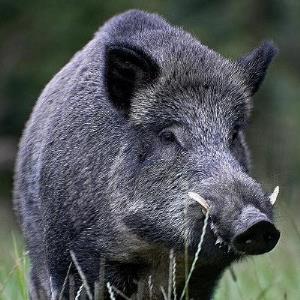 The birds represent one of the most varied and colorful groups of fauna in the region, where throughout the year you can observe more than a hundred species. The birds of prey stand out, like the majestic black vulture (Aegypius monachus), with one of its best populations of the Community of Madrid in the Lozoya Valley.

In the forests, like the pine forests or melojares, species like the blue climber (Sitta europaea) are common.

The red squirrel (Sciurus vulgaris) or roe deer (Capreolus capreolus), associated with forest environments, are habitual residents in the Valley.

After decades of assumption, since 2002, the stable presence of the wolf (Canis lupus) has been confirmed in the region.