From the Archaeological site to The Neanderthals Valley 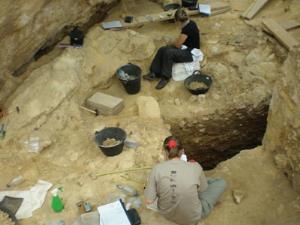 To the exceptional richness of Pinilla del Valle is added the presence in the vicinity of several quaternary archaeological sites, the first of which, known as the Cueva del Camino, was discovered in 1979. Excavations made from the year to 1989 allowed us to find valuable Fossil faunal remains, as well as two molars of the species Homo neanderthalensis.

All these deposits contain, in addition to anthropological remains of Neanderthals, some of the most complete Pleistocene vertebrate fossil associations of the Iberian Peninsula, which combined with paleobotanical and geomorphological data, is allowing reconstruction of evolution The landscape and the climate of the past in this region.

Given its importance, the area of ​​"Los Calveros", in the municipality of Pinilla del Valle, has been declared of Cultural Interest, in the category of Archaeological and Palaeontological Zone in the Resolution of September 14, 2004, by the Directorate General of "Historical Heritage" (published in the BOCM of Friday, September 24, 2004).

For more than 100,000 years, mammals and fish inhabit the Alto del Lozoya Valley along with hominids, from which several molars have been recovered in three of the deposits and lithic utensils. In addition, the fact that some remains are burned and fractured reflect that humans often use fire and also use stone tools in their daily lives. 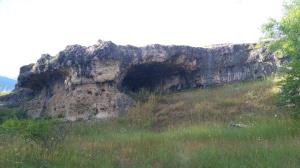 The best represented species are, among the herbivores, the gama (lady dama), the horses (Equus ferus torralbae), the deer (Cervus elaphus) and the uros (Bos primigenius). The carnivores are represented by a large number of species, among which are noted for their abundance spotted hyenas (Crocuta crocuta). There are other carnivores, such as the brown bear (Ursus arctos), the wolf (Canis lupus), the Iberian lynx (the Iberian lynx) or the lion (Panthera leo).

As we said above, the actual research project - codified by Juan Luis Arsuaga, Enrique Baquedano and Alfredo Pérez González - began in 2002. In the campaign of that year, they locate the deposits of the Shelter of Navalmaíllo and in 2003 the Cave of La Good look. These have an age of between 60,000 and 70,000 years and are located a few meters from the Cueva del Camino. 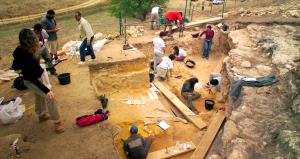 The 2004 campaign allowed Navalmaíllo to expand - confirming that this site is very large, about 300 square meters - and find out that the Neanderthals inhabited it in large numbers and almost exclusively. During the year also the Cave of the Good Pinta was extended, to a lesser extent, being able to verify the presence of Neanderthals and hyenas. It should be noted that during the 2007 campaign they were located at level 3 of the cave of the mullares of the species Homo neanderthalensis belonging to the same individual.

In 2009 the last of the known deposits in the Calvero de la Higuera: The Cave Des-Covered is discovered.

The latter consists of a series of galleries connected to each other to which the roof sinks a measure that the erosion denuded the surface of the calvero in which they are, reason why at present its sedimentary fill is accessible from its upper part.

The data that we have of this deposit are still preliminary. On several occasions, the characteristics of the micromamíferos are characteristic of the end of the Middle Pleistocene, of more than 130,000 years, reason why this deposit was the one that would contain the oldest materials of all known until now in Calvero de la Higuera. In other sectors, paleontological remains and recovered lytic industries point to more modern chronologies, already within the Upper Pleistocene.

In the summer of 2011 four Neanderthal teeth were recovered, three of them of milk, belonging to an infant individual of 2-3 years of age (baptized "Lozoya girl", referring to the Valley of the same name).

In the middle of September, generally coinciding with the Fair of the Trades, takes place the Day of Open Doors of the deposit. Adequate moment to receive an explanation of what is carried there by a hand of the specialists.

The project "The Valley of the Neanderthals"

Home-guai-final Since 2002, thanks to institutional and private support, an interdisciplinary research project has been carried out, involving approximately 80 graduates and students, most of them in Biology, Archeology, Geology and Restoration. Since that year, 3 other sites have been discovered on the same promontory: El Abrigo de Navalmaíllo, the Cave of the Good Pinta and the Cave Des-Cover.The main objective of the "El Valle de los Neanderthales" project is to study the archaeopaleontological sites discovered in the Alto Valle del Lozoya near the town of Pinilla del Valle, Madrid.
The study of this collection of sites, made by a wide range of specialists in different fields of archeology, paleontology and geology, is making it possible to reconstruct the environmental changes experienced by the Alto del Lozoya Valley over almost 300,000 years and to appreciate how those Changes have affected the behavior of the hominids, as well as the species of fauna and flora that lived in this valley.The ultimate aim of this research, and therefore of the project "The Valley of Neanderthals" is to disseminate this knowledge to society.

For more information and GUIDED TOUR RESERVATION, in the project website: www.elvalledelosneandertales.com